RBM strives to offer the lowest prices we possible can. We offer FREE SHIPPING on Orders over $100 to the Continental US (EXCLUDING Body Work and Swingarms). We strive to have the best customer service in the industry and are ready to serve your performance motorcycle needs. 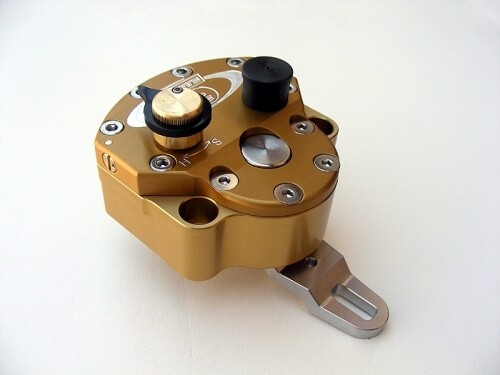 What is a Scotts Steering Stabilizer?
It is a compact, fully adjustable, hydraulic shock absorbing damper, that mounts to your steering head area right above your handlebar mount. It helps control the natural tendency of the “left to right” front end movements known as “head shake” on a motorcycle. By helping to stabilize the front end of your motorcycle, the rear of the motorcycle will track straighter allowing the rest of your suspension to work the way it was designed to. The result in stabilizing the front end means more precise steering also. In addition, the Scotts Steering Stabilizer eliminates that sudden "thrust-effect” of having the handlebars pulled from your hands after unknowingly hitting something unforeseen like rocks, tree roots, rain ruts and potholes. It also helps to minimize rider fatigue and the dreaded “arm-pump” situation that occurs while wrestling the front end of your bike, especially in rougher terrain. Once mounted, it dramatically reduces the unwanted phenomenon known as "Head-shake" that is commonly found on ALL off-road production motorcycles and especially predominant on road bikes once you let off the throttle and the front end dives, causing that “wobble” sensation from increased head angles. This is more predominant now a-days due to the steeper head angles you find on production bikes. It helps keep your motorcycle going straight in the whoops, reduces head shake approaching turns, and smoothes out those rough sections by preventing those handlebar wrenching jolts.

How does it work?
Basically, it operates under the same principle as your front forks or shock, by absorbing the unwanted energy from unexpected impacts via oil being exchanged through valving circuits that the rider controls. Valving inside the unit reacts to the slightest of jolts that are transferred through the forks and crowns of your motorcycle. Internal circuitry and hydraulic valving readjusts the amount of shock that would have been received through your handlebars, helping to keep your motorcycle aimed in the direction you intended it be. The link arm, which connects the stabilizer to the frame, reacts instantaneously, absorbing any unwanted movement. Your suspension was designed to handle the vertical movement of your motorcycle, while the Scotts Stabilizer completes your suspension package by helping to control the unwanted lateral movement.

Where does the Stabilizer work best?
Anywhere there are forces trying to push or pull the front end left to right. If you ride in the desert, our Stabilizer will soon become your best friend. You will find that it almost completely eliminates the head-shake and the instability you get while riding on washboard fire-roads, rocky sections and in high speed sand washes. It helps keep your motorcycle straight in the whoops. In the woods, it's a dream come true. Sharp edged rocks and tree roots that send a shock all the way up to your jawbone are reduced to minor disturbances that allows your suspension to work the way it was intended to. Motocrossers will find the Scotts Stabilizer provides a winning edge by reducing rider fatigue and working with the rider as he/she approaches the end of long Moto. Your bike will track straighter through the stutter bumps, big rollers and sweeping turns while assuring more secured landings at the end of big doubles or tabletops. Road bikes receive the benefits during hard braking, increased high speed stability, and an added point of security after lofting the front end under hard acceleration and setting it back down slightly offline, the front wants to “whip” back straight, this is where the stabilizer will help absorb the energy, helping to keep things under control. We've gone to pain staking lengths to create valving suited specifically for Road bike applications vs. Dirt Bike applications. Road bikes having rebound damping while Dirt bikes have no rebound damping in order to allow quickly for corrective measures during slides. Being infinitely adjustable, there is no reason not to use it. It has no disadvantages!

Why is our Stabilizer so much better than others?
Well remember we started this in 1987. Experience is always a big bonus. Our quality and tolerances are second to none. We go through pain staking procedures to insure the tolerances are maintained to give you the most reliable, accurate stabilizer made. Consistency through a wide range of temperature ranges can only be obtained by keeping these tight tolerances, allowing us to use very thin oil, which in turn, has a higher viscosity index, making it more stable in all conditions. Read the consumer reviews, our customers are our best sales people.

One of our most important features is the fully adjustable, separate high speed valving system, similar to the high speed adjustment in your shock. This is a huge advantage over other stabilizers. Some of our competitors claim to have a high speed valve, but most of them don't. Since the stabilizer is literally a little shock absorber controlling the unwanted left to right motion of your bars, it only makes sense that you would want to have a separate circuit that absorbs the impacts exceeding the normal range of hits, similar to the high speed valving in your shock. Most impacts and head-shake at the front wheel, are high speed" movements. Where on the other hand, turning is generally a low speed movement. If you don't like the feeling the stabilizer provides in turns or while flying a SX jump, you can adjust it out with ours, and still retain its ability to absorb high speed impacts. NO OTHER STABILIZER HAS THIS FEATURE LIKE OURS. Why? Because it's expensive to build and complicated to copy. Not only is the damping rate and high speed circuit adjustable, but the arc of movement over which it operates is also adjustable, we call those sweep controls. So in summary, the Scotts Stabilizer has 3 fully adjustable circuits, all of which are critical to any stabilizers ability to function correctly. Another important feature on the off-road units is, that the Scotts Stabilizer only dampens as the handlebar turns away from center. The handlebar "free-valves" back to dead straight. This feature makes the bike want to go straight, all by itself. This is another huge advantage over other stabilizers. It also boasts a damping control this is adjustable on the fly. It only takes a moment of one handed riding to change the damping, similar to the time it would take to pull a tear-off lens away. The road bike units are equipped with rebound valving back to center, as they are typically leaned into turns and not sliding into turns like Dirt Bikes. This again is a huge advantage in keeping the front end placed where you want it, damping the energy generated trying to move the forks back and forth, left to right on a road bike's steep head angle design.

Can the damper be mounted to other bikes I own?
Yes! Unlike others that are bike specific, another nice feature about the Scotts damper is that it is transferable between bikes in seconds. If you have more than one bike, you only need one damper, and a couple of mounting kits, to be able to transfer it from bike to bike. That way you can use it Saturday on your dual sport ride, and Sunday put it on you're your desert bike or motocrosser. Unlike suspension or motor mods, when you sell your bike, you can take it with you to install on your next bike. Most applications use very simple bolt on brackets for mounting. "Dirt Rider" Magazine said "It's the best investment you can make!"

Does it really work for Motocross or freestyle?
If you're a Motocrosser, the Scotts Steering Stabilizer will give you that extra push and confidence by saving you previously wasted energy. Ever land in a pothole, rut or rock and scare yourself? Ever come up short on a double and have the bars yanked out of your hands? Ever have the track conditions steer YOU off course? You won't believe how this little jewel will compensate for errors like that. Just ask someone who owns one! It is infinitely adjustable to all riding situations, so there is no reason not to use it. It has NO disadvantages!

Will it fit on any motorcycle?
In theory, the Scotts Steering Stabilizer can be adapted to fit almost any application with certain limitations. We have designed the unit to be a "bolt-on" item for most of the major brands of motorcycles. We also offer a weld-on version for those who prefer that feature and or have any limited space for the bolt-on style. We have been the official stabilizer for Kawasaki Team Green, KTM America, Husaberg America, Yamaha Factory racers and of course the Honda Off Road Racing Team who now has double digit Baja 1000 victories with our stabilizer on board.

Is it easy to put on?
If you can change a spark plug, you should be able to install a Scotts Steering Stabilizer. If you have any questions during installation, we are here to help you. There is no welding for most kits, and it mounts in minutes. The unit comes with a step by step instruction manual that would make it easy even for Forest Gump. Remember though, this is a very sophisticated unit that does more for your motorcycle than any other after market improvement. You need to make sure you install it correctly to gain the maximum potential.

Does it need constant servicing like some of the other dampers I've seen?
No Way. In fact when mounted correctly, it almost needs no attention at all. Just like your forks and shocks though, you'll need to give it some "TLC" after many hours of usage. It is designed so there are no wearable parts when mounted properly, (just oil fatigue). Scotts Performance Products provides a complete service program should you need it. Simply UPS the unit to us in between rides or races, and will put it through our ten point inspection program that includes; tolerance checks and an oil change. You should have it back in time for your next race.

Is it worth the investment?
Well every leading off-road magazine in the country considers this product one of the top ten products of all time! That's a potent statement. It is not the only stabilizer on the market, but it is definitely the best, and has more features, championship victories, National titles and positive feedback than all of the other ones combined! Remember, we are the originator of this idea and owned the patent! If you plan to continue riding for one year or the next ten years, our stabilizer will still be there when others have long disappointed you.

Save this product for later
Display prices in: USD